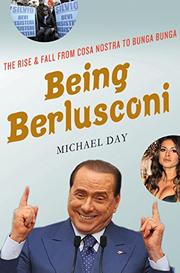 The Rise and Fall from Cosa Nostra to Bunga Bunga

In the first comprehensive examination of former Italian Prime Minister Silvio Berlusconi’s life and career, Independent Italy correspondent Day paints a lively but noncomplex picture of an ambitious and deeply flawed man in a system that accommodated his numerous vices.

Berlusconi’s rise is a fascinating story that reads straight from a tabloid, littered with corrupt politicians, shady dealings, and women who emerge more as caricatures than real people. The author ably brings to light the various avenues by which Berlusconi first made his fortune and later made Italy his playground through self-serving legislation. With such rich fodder and his experience for nearly a decade as a journalist in Italy, it’s not surprising he is able to do so. However, Day vacillates between treating Berlusconi’s antics as a political sideshow and exposing them as a true threat to Italy’s political system. When the author does turn to his subject’s legacy, highlighting the extensive damage he did to the country’s culture and reputation, it reads more like an afterthought than a legitimate meditation. Day gives great attention to the sex scandals that made Berlusconi an international joke, but he focuses less on exploring the system within which Berlusconi existed. Leaps between his roles as an entrepreneur and a politician and between investigations and public scandals feel jarring, as the author gives too little context. In other instances, however, Day provides too much detail—e.g., the minibiography of one of the young girls whose relationship with Berlusconi eventually brought about the political titan’s downfall. Although the author explains the many whats of Berlusconi’s long career, he largely neglects the more intricate questions of how. In so doing, he makes Italy seem more like a bit player than the stage in Berlusconi’s circus.

As entertaining and shocking as one would hope for, but the book leaves readers with more questions than answers.