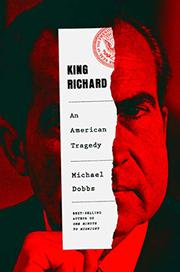 A seasoned journalist tackles one of the most notorious political scandals in American history.

In his latest, self-described “presidential crisis historian” Dobbs, former Washington Post reporter and author of a trilogy of nonfiction books about the Cold War, delivers a spellbinding account of the 100 days following Richard Nixon's second inaugural. Fresh off one of the biggest landslides in U.S. history, the president went right back to work waging “all-out war against his political enemies” and trying to secure his legacy of brokered peace with Vietnam and the opening of relations with China. As the weeks passed, however, details emerged about break-ins at Democratic National Committee headquarters, prompting the burglars and their handlers in the administration to turn on each other as paranoia set in. To this day, there is no conclusive proof that Nixon directly ordered the espionage, but “there is little doubt that he set in motion the chain of events” that led to it. Divided into four “acts,” this masterful book and its title summon the Shakespearean tragedy in which the most powerful man in the world built himself up and then self-destructed. Familiar actors in this drama, which never seems to lose its excitement across the decades, include G. Gordon Liddy, John Dean, Jeb Magruder, and H.R. Haldeman. Of course, the primary focus is Nixon, the son of poor Southern California Quakers who rose to the nation’s highest office only to leave forever disgraced. Dobbs admits that his book is not meant to be an exhaustive account like Stanley Kutler’s The Wars of Watergate. Rather, the author delivers an intimate, engrossing picture of Nixon as a visionary man “obsessed with privacy and solitude,” an affectionate husband and father, and a gut-fighting outsider mystified by power and all its trappings, styling himself as a kind of blend of Abraham Lincoln, Benjamin Disraeli, and Charles de Gaulle.

A riveting portrait of ambition, hubris, betrayal, and the downfall of an American president.