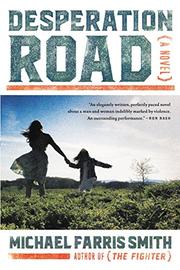 Two hard-luck cases collide in this smooth-flowing novel of the Deep South, where a Mississippi town harbors a long-brewing hunger for vengeance and a slim chance of redemption.

Maben and Russell are heading to McComb from different directions, geographically and otherwise. She has been on the road for too many years after a terrible car accident and has tried almost everything to make a life somewhere for herself and her young daughter. He has been serving 11 years in prison for a drunken driving incident that killed a young man. But fate takes Maben on yet another nasty detour via a deputy sheriff who rapes her and then calls up two friends to join the party. Maben grabs his gun and ends that soiree before it gets going. Russell steps off a bus and into the fists and boots of the dead young man’s two brothers. Russell’s stolid father and a Mexican woman he has taken in offer stability when it’s most needed. Another deputy sheriff, who played high school football with Russell, faces the awkward task of finding out why his old friend turned up at the scene of Maben’s highly motivated gunplay shortly after investigators arrived. Smith (Rivers, 2013, etc.) gives Maben a gritty strength that may not be enough in her current plight. Russell, a moody, meditative loner who knows that “rough lives got rougher,” has his hands full with the murderous brothers and seeking out the woman he lost while in prison, but he’s inclined to help where he can. The book’s brooding atmosphere lights up often with strong scenes of high tension.

Smith writes shapely prose and sharp dialogue and everywhere displays an acute sense of the moments and pain that can define lives in a small town.