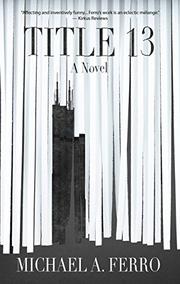 by Michael A. Ferro

An alcoholic confronts a work crisis and the sting of loneliness in this debut novel.

Heald Brown works at the Chicago Regional Census Center in a secretive division called the Census Coverage Measurement, devoted to meticulously gathering and zealously protecting data about the city’s population. One day, he comes into work to learn that 37 pages of the most sensitive, classified information—specifically protected by a regulation called Title 13—has mysteriously gone missing. Deputy Director Elina Flohard declares a state of emergency, intemperately warning that such a security breach could presage the very dissolution of society, and author Ferro humorously captures her hyperbolic alarmism. Soon after, Heald’s immediate boss, manager Gilbert Tabin, inexplicably disappears after a meeting with Flohard, leading some to believe he was shoved down a laundry chute. Meanwhile, Heald grapples with a claustrophobic, solitary existence, which he somewhat numbs with out-of-control alcohol consumption. He also falls madly in love with co-worker Janice Torres, but both his addiction and his inclination toward privacy frustrate hopes of romantic success. Then his grandmother is badly injured in a car accident and subsequently diagnosed with cancer, compelling him to re-examine his life of unfulfilled promise and solipsistic desperation. Ferro’s work is an eclectic mélange of parts—some farcically absurd and others more sober. For example, in one poignant moment, poetically expressed, Heald, while comforting his dying grandmother, wonders about the possibility of an afterlife: “Once she was gone, that would be it, and there would be no report from the other side—no telegraph or wire call from an ocean liner on the other side of world to let the others back at port know it had safely made passage.” However, the plot’s pace is enormously slow, and it often gets sidetracked by narrative detours that unnecessarily add to the book’s page count. Also, the author’s pastiche of styles, while impressive, can be disorienting as it juxtaposes the manically satirical with the quotidian. Still, there are flashes of comic inspiration, and Heald is a deftly drawn protagonist.

Affecting and inventively funny despite its cumbersome length.