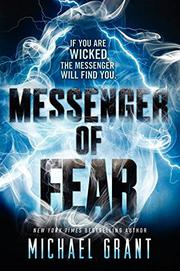 From the Messenger of Fear series, volume 1

Sixteen-year-old Mara thinks she might be dead when she wakes up in a mist and finds herself with a strange boy dressed in black and displaying frightening supernatural powers.

Neither Mara nor readers will understand what’s going on until the final pages of this interesting paranormal mystery, but readers, at least, can have plenty of fun speculating about it. The boy, the titular Messenger of Fear, tells Mara that she is not dead but that she has become his apprentice—apparently by her own choice. Her response is emotional when Messenger shows her the suicide of a high school girl named Samantha. As part of her training, the Messenger then demonstrates his task when they follow a couple that commits a wrong, giving them the option of winning a gruesome game or facing their worst fears. Later, Mara will begin to understand what that choice means when she witnesses a boy being burned at the stake, a scene described in gruesome detail. But the story keeps returning to Samantha, and Mara begins to anticipate the punishment of the girl who knowingly bullied Samantha, literally, to death. Grant only slowly unveils the reason Mara is with the Messenger, building tension and atmosphere expertly for maximum impact. Readers will find that in the end, it all comes together extremely well.

An unusual and intriguing puzzle of a book.