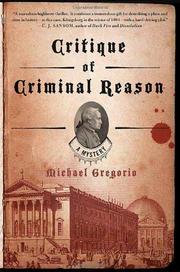 In the winter of 1804, an unusually well-trained judge returns to Königsberg, Prussia’s intellectual center, to investigate a series of murders associated with something known as the Devil’s Claw.

Procurator Hanno Stiffeniis had resigned himself to rustication far from the city in which he received his university education, including tutelage from the eminent philosopher Immanuel Kant. Even though Stiffeniis has been forbidden further contact with his esteemed former professor, he conducts his work as a judge according to Kantian principles of logic, and he’s named his son Immanuel. It turns out that Kant himself has ended Stiffeniis’ exile from Königsberg because he thinks his former student, under his eccentric guidance, may be able to solve a string of murders whose weapon remains mysterious and perhaps supernatural. Stiffeniis must sort out Kant’s murky motivations as well as the mind behind the murders, and must do so as soon as possible. Königsberg, like most of Prussia, anticipates an imminent invasion from Napoleon’s army, and is meanwhile suffering one of the worst winters in its history. Should the mayhem continue, widespread civic unrest will be the inevitable result.

Like Umberto Eco, Gregorio has succumbed to the allure of fictional speculation about great works of western philosophy that were never written. Unlike The Name of the Rose, however, there’s very little pleasure to be had in this dark, grotesque and, yes, rather illogical novel.