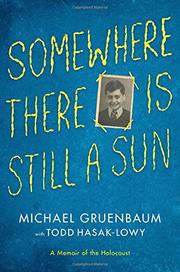 SOMEWHERE THERE IS STILL A SUN

A Memoir of the Holocaust

by Michael Gruenbaum with Todd Hasak-Lowy

Holocaust survivor Gruenbaum has a story to tell.

From prewar childhood in Prague to Terezin (and participation in its infamous performances of Brundibar) and liberation by the Red Army, a first-person narration relates Gruenbaum’s story; although his father perished, remarkably, he, his mother, and his sister survived together. In an introduction, Gruenbaum describes his story’s path to publication some 70 years after the end of the war. After many rejections of his original, picture-book manuscript, his story was picked up with the suggestion that his experiences be retold by a professional writer in a much longer book. What follows is Hasak-Lowy’s re-creation of Gruenbaum’s experiences, told in a childlike first person and featuring novelistic flourishes such as extensive, “recreated” dialogue. In a lengthy afterword, Hasak-Lowy describes his process, which included a trip to Prague and Terezin and consultation with Gruenbaum. In writing, he "elaborate[ed] on the fragments of [Gruenbaum’s] memories" by "fill[ing] in gaps on a very regular basis," and "suppl[ied] large parts" of the personalities and actions of the characters "in order to bring the scenes with them to life." Gruenbaum is “very pleased with the results,” but moving though it is, the book simply does not meet the definition of nonfiction, which the label “memoir” implies.

As historical fiction, this offering is fine, but it is not nonfiction by any stretch of the imagination.