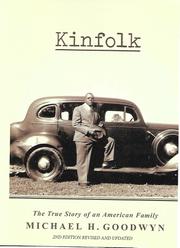 The True Story of an American Family, 2nd Edition

Goodwyn tells the story of an African American family in this debut blend of history and memoir.

The author lost his mother to kidney disease in 1970, when he was a high school freshman in Kalamazoo, Michigan. Soon afterward, he was involved in a car accident that put him in the hospital for six weeks. The shock of these events instilled in him a great desire to find out where he came from: “Sometimes Mama would talk about her ancestors,” he remembers. “Mama’s great grandmother was a slave until she was twelve, when her father bought her freedom.” Goodwyn set off on a decadeslong genealogical journey to discover the story of his forbears, and this book is an account of that search and a presentation of its results. It includes the stories of Levin Huston and Esther Polk Huston, married slaves who lived on a Maryland plantation; their son, Solomon Huston, who was born in bondage and died as the founder of a bank; and the author’s great-grandfather Samuel Garnett Thomas, who, like the author’s father, eventually served as a high school principal. Goodwyn’s prose is conversational in tone and possesses a cheerful buoyancy, as in a discussion of the Hustons’ children: “For whatever reason, Hester and her family never knew what happened to Levin Delans Huston. But 158 years after Levin D. sent his niece, Willie, that jade necklace, I now know what became of him.” It’s a long read at more than 500 pages, and it feels more like two books in one; the first half is essentially a memoir of Goodwyn’s life, and the second is a series of profiles of his ancestors. None of the individual stories are particularly compelling, but the overall family history—and the account of Goodwyn’s rediscovery of it—gives readers a touching portrait of an American family. The book, which includes occasional photos of family members, also effectively shows how ancestry-research websites have helped many black Americans reconnect to their pasts. Goodwyn is an empathetic guide, and although some sections are more interesting than others, he manages to lend emotional weight to the project as a whole.