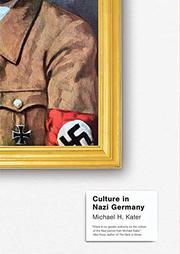 A much-needed study of the aesthetics and cultural mores of the Third Reich, with often surprising turns.

Kater (Emeritus, History/York Univ.; Hitler Youth, 2006, etc.), a widely published scholar of the Nazi era, begins with the premise that “in order for a new Nazi type of culture to take hold, the preceding forms first had to be wiped out.” These forms were those presumed to be “non-German” and, indeed, were largely Jewish or African: jazz, modernist art, anything smacking of the avant-garde–ism of the Weimar era. Joseph Goebbels was among many Nazi officials who took the lead in bringing music, film, architecture, and the like under the control of the regime. Though Hitler had a thorough cultural program in mind, his tastes were not always predictable or widely shared: He may have revered Wagner, but he wasn’t much of a Beethoven fan even if, in 1934, Goebbels, always pressing for a “German” art, “cut down on the political crudities and embarked on a campaign of promoting serious music, beginning with a Beethoven cycle in February, followed by rich programs of music by Bach, Handel, Mozart, and Bruckner.” Hitler, like so many readers of German fiction, was a fan of the pseudo-Westerns of Karl May, but he had no special interest in farming and so paid little attention to his regime’s emphasis on “blood and soil" novels celebrating farming and the outdoor life. Nazi officials spared a few Jewish practitioners of the arts, but most suffered the same fate as Jews everywhere in the Reich. In a narrative rich in detail and documentation, Kater examines such matters as the plotlines of films in the wake of the defeat at Stalingrad, competition among various Reich figures and ministries to take the lead in cultural matters, the flight of German intellectuals such as Thomas Mann to the U.S., and the general mediocrity of Nazi art.

“The relation between culture and tyranny is a complex one,” Kater concludes. Indeed, and his book does much to make it comprehensible.