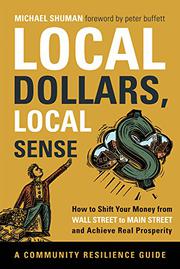 In an installment of the environmentally responsible publisher’s Community Resilience Guide series, an astute economist weighs in on a hot-button issue: how to keep local dollars invested in local businesses.

Shuman (The Small-Mart Revolution: How Local Businesses Are Beating the Global Competition, 2007, etc.) offers real-time suggestions for investing hard-earned American money back into community-based businesses. In the introduction, musician and philanthropist Peter Buffett restates the importance of a return to the “fundamental aspects of human nature” to reverse what he believes to be the nation’s crippled socioeconomic structure. Shuman expands on Buffett’s beliefs by citing America’s broken investment system whereby money spent at local merchants becomes reinvested into large Wall Street corporations. He cites several “local-investment tools” as the building blocks in a plan to reallocate and redistribute capital back into communities that need it more than the “bandits of Wall Street.” After an outline of weak retirement investment returns, a stagnant economy and the bleak outlook for future retirees, the author advances highly practical arguments in favor of supporting locally grown foodstuffs, community banking, autonomous cooperative organizations and the adoption of a sustainable mindset. Shuman sensibly lays out the groundwork for a revamped economic platform with profiles of many viable, “green” companies and nonprofit alliances alongside intensively researched facts about banks, securities and recession-proof purchasing strategies. As his thesis deepens, however, the material becomes more applicable for more seasoned, jargon-friendly economists. Still, those emerging with a modicum of head-scratching will find Shuman’s galvanized eco-speak an intelligent voice in assigning a conscience to the process of how and where hard-earned dollars are spent.

An impassioned, forward-thinking plea for economic reform at the grassroots level.