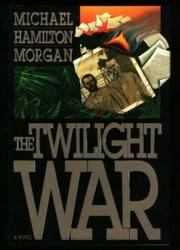 Moods of deep disillusionment and world weariness mix with the usual paranoia to fuel this odd spy thriller set in a post- Cold War but pre-Iraq world. Ex-Foreign Service officer and first-time novelist Morgan writes knowledgeably about behind-the-scenes Washington and the look and feel of Prague and the jungles of Guatemala. It sometimes seems, however, that he has bitten off more than he can chew in a 368-page story that focuses on a burnt-out CIA man's search for his friend's killer, but also intermittently includes the lengthy journal of a Czech Communist psychoanalyst once privy to Freud's Wednesdays and, briefly, to Lou Andreas-Salome's bed. At other times, it seems Morgan is chewing more than he bit off with poetic digressions emphasizing autumnal or wintry vistas and sour tastes or smells (the White House is ``a white-dwarf plantation house of luciferin light standing in its own parhelion, this corona of continental energy, this imperial aurora polaris''). But when less baroque, Morgan can be nicely evocative of the crepuscular state of mind. It is twilight time not only for the disillusioned 42-year-old hero, divorced and a part-time father, but for the US as well, lost without its foe of 45 years. History, however, has quickly overtaken the book, which tells of a Washington in which ``the spotlight is off the military.'' Even out of the spotlight, as Morgan has it, the military is not hedging any bets, a clue to the book's chilling conclusion. Overambitious, too densely written, but, still, a highly original stab at deepening the espionage thriller.