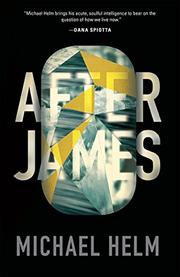 The three parts of Helm’s novel each present a distinct storyline related tenuously, perhaps, to its neighbors, but they share a vivid tone and an unsettlingly malleable reality. This sense of a world in which science and technology have delivered on our most paranoid imaginings, but in a way that makes life more susceptible to strangeness instead of less, has the odd effect of sealing the narrative tightly inside each protagonist’s head. Ali is a scientist who has retreated to an isolated house to work up the courage to blow the whistle on the flawed “creativity drug” that she helped design. James is a failed poet who finds himself hired by a mysterious man and sent to Rome to investigate the meaning of a series of poems posted anonymously on the internet. Celia is a researcher for a drug company who discovers that her scientist father has undergone a conversion to a vague spiritualism at the hands of a manipulative conceptual artist. The details of their stories seem like material for a science fiction thriller, but each character is mired in existential confusions brought on by personal trauma, and the reader is trapped alongside them, in prose that is sometimes excessively reflective and gestural. Despite having murders, geopolitical strife, hacktivists, and secretive anarchist groups, the novel muffles any suspense and momentum. The characters think so hard about their feelings that they don’t feel them with any conviction, though Helm often strikes upon perfectly selected details of human interaction.

A novel that seems to aspire to a consciously literary emulation of William Gibson but struggles with upsetting passivity.