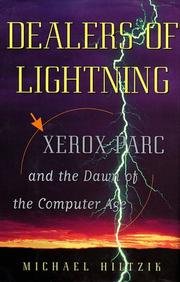 Xerox PARC and the Dawn of the Computer Age

In the late 1960s, Xerox founded a research center at Palo Alto, Calif. In time, that facility, known as PARC, became ground zero of the computer revolution, as recounted here.

In the dinosaur era of computing, a typical machine filled a large room and was shared by dozens of researchers. Los Angeles Times editor Hiltzik (A Death in Kenya: The Murder of Julie Ward, 1991) credits Robert W. Taylor, who assembled the PARC team, with changing that. Taylor’s field was psychology, not engineering; but his vision of the computer as a communications device was a radical departure. He got his chance to realize it when Xerox’s chief scientist Jacob Goldman persuaded his superiors to launch a basic research facility along the line of AT&T’s famed Bell Labs. Xerox management, more interested in marketable products than in pure science, nearly killed the center before it opened. But Taylor gradually built his team of young computer hotshots, and the innovations flowed: mouse, Ethernet, even the term “personal computer.” By 1973, a team led by Chuck Thacker had created Alto, a computer small enough to fit under a desk. Its first program displayed an animated graphic as a test of the user interface: Cookie Monster, from Sesame Street. Two years later, Xerox was selling a mail-order computer kit called Altair 8800—one of which inspired a young hobbyist named Bill Gates. But except for the laser printer, Xerox consistently failed to exploit PARC’s innovations. Instead, the company pushed the Star workstation, released in 1981. Within six months, IBM had released its first PC, and the Star was obsolete. Meanwhile, Microsoft and Apple Computer (both of which appropriated their design philosophy from PARC) were on the rise. Hiltzik focuses on the human dimensions of the story, taking full advantage of the rich cast of characters involved in earth-shaking developments. A compulsively readable account of perhaps the most important technological undertaking since the Manhattan Project.