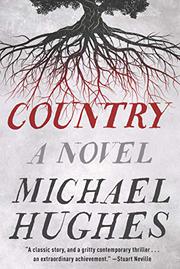 The Iliad in the Irish borderlands during the final months of the Troubles.

Northern Ireland, 1996. Despite the cease-fire, Shane Campbell (alias Pig), the Officer Commanding of a Provisional IRA unit, is planning a strike on a nearby British Army garrison. Why? Because Pig’s sister-in-law Nellie, the wife of his brother Brian (alias Dog), has tarnished the Campbell name by turning “tout” (Loyalist/British agent) and then running away to England with her handler. Sound familiar? Just you wait. The action opens with a disagreement between Pig and Liam O’Brien (unsubtle alias: Achill). After Pig is forced to return “his girl” to her father, a local Protestant landowner, he decides that he must have Achill’s girl as a replacement. Achill—the famed Border Sniper, hugely feared by the IRA’s enemies—rebels against Pig’s tyranny by putting down his arms, an act which emboldens the British (the best of whom is SAS Capt. Henry Morrow) to set an ambush for Pig’s team. The rest is…well…The Iliad. And that’s the problem. Writing in a fast-paced Irish lilt, debut bard Hughes is at his best (which, mind you, can be good) when he’s least faithful to his Homeric blueprint. His reimagining of Helen (here Nellie) is especially striking, showing how a young woman’s search for freedom ends up entangling her (because abortions are illegal) in the very place and conflict from which she seeks escape. But Nellie’s section is, alas, an exception. Hughes is faithful to Homer’s story at the expense of his own. His characters are not themselves but proxies for the Homeric originals; they don the armor and read the lines but are lacking in on-the-page emotional complexity. Similarly, dozens of scenes are included to simply check off their corresponding plot box in The Iliad—and therefore deliver very little affect of their own. The result? The novel, despite its promising start, quickly devolves into a litany of allusions. Look! The Republican pub is called the Ships! Look! The British fort is called Castle William but some kids monkeyed with the sign and now it reads “Castle Illiam!” Look! Pat (nee Patroclus) is literally wearing Achill’s body armor! Look! Achill, the famed long-distance sniper, has literally chased Henry three times around Illiam’s walls on foot!

A too faithful retelling that, despite some vivid moments, ultimately has little life of its own.