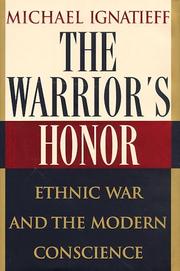 Ethnic War and the Modern Conscience

A prominent commentator on nationalism and ethnic violence reflects on the destructive power of ethnic warfare and the redemptive potential of modern universal human-rights culture. How can we reconcile two simultaneous trends: increasing globalization (via mass media and international agencies such as the UN, the Red Cross, and Amnesty International) and the persistent chaos of ethnic warfare abroad and racial disintegration at home? Ignatieff (Blood and Belonging, 1994, etc.) poses this difficult question and suggests some tough answers in his new collection of essays. The Warrior's Honor addresses specific situations and issues, but Ignatieff's overriding concerns are the ethics and morality of world citizenship. His purpose in pulling together these essays is to ``plumb the moral connections'' created by the recent invention of human-rights culture. Appropriately, he opens with a piece on the ethics of television, which has broken down untold barriers but has also made us ``voyeurs of the suffering of others.'' Elsewhere he examines, through the prism of Serb-Croat animosities, how nationalism is a kind of narcissism by which the self is glorified and the other is devalued. Individual essays on accompanying Boutros-Ghali's 1995 African tour and on the Red Cross in the age of modern ethnic warfare attest to the concrete hindrances to moral intervention. Ignatieff seeks inspiration from an assortment of thinkers, from Freud and Adorno to observers of nationalism and current conflicts such as David Rieff and Timothy Garton Ash, and, finally, to the novelists Joyce and Conrad. As all these essays have appeared in different or partial form elsewhere, many readers will not be surprised by the collection. They will, however, note that Ignatieff has gathered the essays together as a coherent whole that speaks with optimism tempered by the objectivity gained from his firsthand experiences in the field. A Joycean call for awakening from the ``twilight of myth and collective illusion'' that is nationalism.