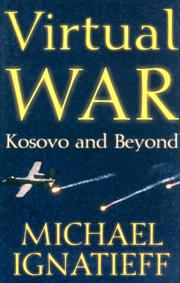 Ignatieff, who once lived in Belgrade, focuses the lights of his impressive experience and intelligence on the 1999 bombing of the former Yugoslavia, intended to prevent Slobodan Milosevic from carrying out ethnic cleansing in Kosovo. This campaign ``looked and sounded like a war,'' Ignatieff writes, but it was ``a spectacle: it aroused emotions in the intense but shallow way that sports do.'' Throughout the book, much of which appeared as separate pieces in The New Yorker, he worries that if war becomes unreal—virtual rather than actual to those dominating the conflict—then powerful states may be ``tempted to use it more often.'' Ignatieff first shadows US Special Envoy Richard Holbrooke in December 1998 as he shuttles around the Balkans attempting to solve by diplomacy issues that will eventually require military force. The author observes that former secretary of state Henry Kissinger saw negotiation as a chess game; Holbrooke says ``it’s more like jazz . . . improvisation on a theme.'' Ignatieff then moves to an analysis of ``Balkan physics,'' where everything is ``chaotically unpredictable.'' After a section containing an Email debate between Ignatieff and an English adversary is an unblinking look at Gen. Wesley K. Clark, who commanded NATO’s forces, leading a team that ``produced a virtuoso display of technological improvisation.'' Next is an illuminating account of how the International Criminal Tribunal brought a war-crimes indictment against Milosevic. Ignatieff masterfully intercuts the political maneuvering with an account of a Serb massacre of ethnic-Albanian noncombatants at the village of Celine. He follows with a description of a difficult visit with Serb friends after the hostilities ceased, and ends with a wonderful essay about the new face of warfare: virtual wars lead to a ``less stable world,'' he concludes, because the victors do not stay, do not ``bring order.''