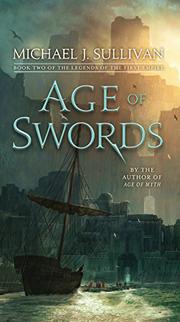 From the Legends of the First Empire series, volume 2

Although Raithe the God-Killer had shown humanity that the magical Fhrey are mortal and not mythic gods, open conflict remains between the two nations; with the balance of power tipped toward the advanced weaponry of the Fhrey, Rhune chieftain Persephone must undertake a quest of wit and wisdom, rather than brawn, to give humanity a fighting chance to win.

The second book of Sullivan’s epic-fantasy series The Legends of the First Empire returns readers to the land of Elan in the years before his previous Riyria Chronicles. Picking up where Age of Myth (2016) left off, the book follows the adventures of Suri, a mystic, and her white wolf, Minna; Persephone, chieftain of Dahl Rhen; Arion, the renegade ylfe; Raithe; Brin, the Keeper of the Ways; schemers Malcolm and Nyphron, and some new players, such as crippled Gifford and his friend and inventor named Roan. Launching readers headfirst into another action-packed (if cliché-filled) epic, Sullivan begins with a fatal lightning storm, which heralds an invasion of Giants, leading to all-out war between the Fhrey and the Rhune. The fate of “even all of humanity” will come to rest on Persephone’s cunning (she steals secrets from a race of dwarves), the inventions of Roan, and the moxie of a girl, Moya, who has become an expert at the bow and arrow (echoes of The Hunger Games). Along the way, some new/old technologies, like the quill pen, ironmongering, and archery, are invented, and Persephone’s quest brings her clan the ability to forge swords of iron far stronger than the Fhrey’s bronze ones that will be used to usher in a new age.

This novel has a refreshing, if somewhat dated, feminist ethos: “a handful of women and a few young girls” emerge as the newfound font of cultural strength in a changing society and are the heroes of this otherwise derivative tale.