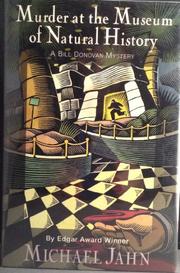 MURDER AT THE MUSEUM OF NATURAL HISTORY

Except for Lt. Bill Donovan—a last-minute substitute for the NYC police commissioner—the guests at the opening of billionaire industrialist-turned-philanthropist Paolo Lucca's fabulous Treasure of the Silk Road exhibit at the Museum of Natural History are all certified VIPs, even if, as one of them tells Donovan, they've shown up in order to get paid off for their part in Lucca's wholesale raid on their countries' antiquities. But they're out of luck, because somebody's stabbed Lucca to death with Kublai Khan's bejeweled dagger. The obvious suspect is Palmiristan terrorist Mohammed Akbar, who'd blow up the pyramids if it would stem the flow of Westerners to the Islamic East. But Donovan, rousing himself from his pursuit by Lucca's widow, Katy (a model/actress who's suddenly developed an improbable yen for NYPD officers who are also paragons of recherchÇ learning), wonders whether the alibi of Katy's former boyfriend Steven Clark, Lucca's business partner, is quite as ironclad as it looks—and whether he can goad the discarded lover to action by slowing down enough to allow the alluring widow to overtake him. If you race to beat the contestants on Jeopardy!, you'll love Donovan, who's so well-informed about everything that you just want to pinch him—hard. The real disappointment in this pleasant diversion is that the author who so hauntingly evoked St. John the Divine in City of God (1992) makes such perfunctory use here of a potentially great setting in one of Manhattan's most magical museums.