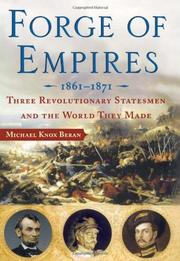 Three Revolutionary Statesmen and the World They Made, 1861–1871

A sprightly work of scholarship by journalist-historian Beran (Jefferson’s Demons: Portraits of a Restless Mind, 2003) cuts suspensefully among decisive moments in the lives of Abraham Lincoln, Otto von Bismarck and Russian Tsar Alexander II as they revolutionized their respective countries.

Lincoln issued the Emancipation Proclamation and united a bitterly divided United States; Bismarck wrestled the German states from Hapsburg control and created a modern militaristic Prussian stronghold; Alexander gambled on reform by freeing the serfs and ushering in a rule of law. The three leaders essentially fashioned their countries into “machines of freedom,” the consequences of which still reverberate today. In alternating segments moving chronologically from 1861 to 1871 and after, Beran sets his vivid historical characters against increasingly dire backdrops. In Russia, the people were growing restive under a decaying autocracy, and Alexander, influenced by the British Enlightenment, wisely eschewed the traditional course of coercion followed by his forebears in favor of an uneasy brand of liberalism. Beran provides portraits of Turgenev and Tolstoy to flesh out these revolutionary ideas, which ultimately failed and led to the tsar’s assassination. In Germany, Bismarck, acting as minister-president for the ineffectual King Wilhelm on the motto “blood and iron,” broke with Berlin’s Parliament and challenged Austrian authority, using the music of Wagner and the poetry of militant nationalism to whip up popular support for his furious campaign of annexation. Most American readers will find the Lincoln sections the most riveting, as Beran re-enacts the agonizing decisions of the president as he tenaciously held to executive power in spite of Southern treachery, standing by dilatory General George McClellan just long enough to gain one decisive victory and stave off foreign intervention. The author also skillfully interweaves selections from Mary Chesnut’s diary and Walt Whitman’s work.

The wind goes out of Beran’s sails after Lincoln’s assassination, but he handles well the intriguing biographical histories of three legendary leaders.