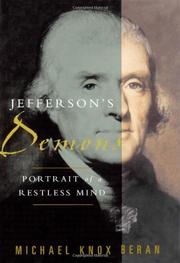 Portrait of a Restless Mind

An examination of Jefferson’s career with attention to his psychological states, his debates with his inner voices, and his struggles with Federalist adversaries.

Lawyer/writer Beran (The Last Patrician: Bobby Kennedy and the End of American Aristocracy, 1998) has an efflorescent style that sometimes charms, sometimes cloys (he’s especially fond of alliteration), but he says many striking things about Jefferson, the man and the politician. Jefferson’s greatest productivity often followed hard upon headachy periods of ennui, the author argues, but he establishes little beyond an interesting correlation. Beran divides his treatment into four seasonal sections, beginning with spring and ending with winter, and swiftly deals with the superficial biographical facts. Slavery is a consistent motif, and the author generally does well to point out—repeatedly—Jefferson’s failure to liberate people at Monticello as he simultaneously called for the liberation of people in general. (He is reluctant to believe that Jefferson fathered Sally Hemings’s children and appears to think that a master’s sexual relations with a slave could be something other than rape.) In his sprightly style, Beran takes us to familiar biographical landmarks: the Declaration of Independence, the death of Martha Jefferson, the sojourn in France, the Grand Tour, the battles with Hamilton, the decline of Aaron Burr, the two presidential terms (he characterizes both inaugural addresses as dull), the University of Virginia, the now-and-then intimacy with John Adams, and death. He also deals quite effectively with the troubling contradictions in Jefferson, a democrat who lived like an aristocrat (fine wine, fine food, fine first editions, high debts), a man versed in classical ethics who tried to purge the Supreme Court of his political enemies, a true believer in the Constitution who stepped outside its boundaries to enlarge those of the US with the purchase of Louisiana. A particularly intriguing chapter describes interior conversations among various portions of Jefferson’s mind.