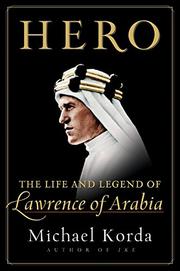 The Life and Legends of Lawrence of Arabia

Book-publishing veteran and prolific historian Korda (With Wings Like Eagles: The Untold Story of the Battle of Britain, 2009, etc.) offers a comprehensive, admiring treatment of one of England’s most popular if controversial military celebrities, T.E. Lawrence (1888–1935).

The author does not restrain his enthusiasm for, and even awe of, his subject. He calls Lawrence’s Seven Pillars of Wisdom (1927) “one of the great pieces of modern writing about war” and compares him with a dizzying range of characters, from Odysseus to Princess Diana. At first, Korda uses Joseph Campbell’s work of comparative mythology, Hero with a Thousand Faces (1949), to provide a framework, then, mercifully, abandons it. The author begins during World War I with the involvement of the diminutive young Lawrence, still in his 20s, already fluent in Arabic and other languages and already an authority on the Middle East. Korda describes military and political maneuvers and then retreats to narrate Lawrence’s complicated birth (his parents were not married), boyhood, education and young manhood. Throughout, the author emphasizes Lawrence’s deeply troubled relationship with his mother, but he also underscores his ferocious work habits, enormously high pain threshold (captured by the enemy, he endured severe beatings and rape) and unique combination of modesty (he refused honors) and pride (he wrote many letters to newspapers and cultivated friendships with George Bernard Shaw, Lady Astor, Thomas Hardy and others). Lawrence’s military and political successes in the Middle East are undeniable, but his postwar life was a disturbing mixture of depression, enormous celebrity, a deep ambivalence about routine military life (he was in and out of the RAF) and sexual confusions. A motorcycle accident killed him at age 46.

Though occasionally fawning, an accessible, textured story of one man who intimately knew the slings and arrows of outrageous fortune.