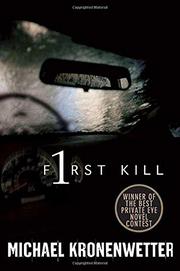 Back in high school, Jack Drucker, Elizabeth Kermanski and Hank Berlin were a famous trio. Now Jack’s dead, Elizabeth’s a widow and Hank’s the p.i. she hires to find out why.

Not just who—that’s cop work—Elizabeth wants the why she’s a widow, and Hank’s the only one she’ll trust to furnish the answer. Which confuses him a bit, in light of how little they’ve seen of each other over the past couple of decades. In a town as modestly sized as Pinery Falls, Wisc. (pop. 90,000), you’d think old friends would cross paths with some frequency. But that was the thing, of course. They’d stopped being friends. Jack had taken Elizabeth away from Hank—not underhandedly, true enough, but with heart-breaking effect nonetheless—and then, in time, life had done what life can do, turning the three into nodding acquaintances. But someone fired a bullet into Jack’s head, and Hank realized he wanted answers for his own sake. The leads are few, though interesting. Was it possible that Jack—an investigative reporter for the local paper—had come too close to learning a guilty secret? Did a certain big city racket boss have a Pinery Falls connection he needed to protect—the hard way? Smart, tough and a natural bulldog, Hank finds the answer he’s looking for. And then wishes he hadn’t.

People to care about in a briskly paced debut novel.