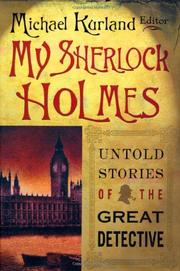 Untold Stories of the Great Detective

Hasn’t everybody in the Holmes canon, from Irene Adler to Inspector Lestrade, already been heard from? Hardly, according to this collection of twelve and a half new stories most notable for their cool audacity in fleshing out the Master’s legend with hitherto-unsuspected episodes (Richard A. Lupoff’s account of his tutelage under the Chevalier Auguste Dupin, Peter Tremayne’s manful attempt to present the true story of his duel with Colonel Sebastian Moran, Cara Black’s romantic idyll with Irene Adler, and Gerard Dole’s boldly superfluous collaboration of Holmes with his page boy Billy, graduated to detective status himself) and their ingenuity in manipulating the unexpected narrator’s point of view (from Gary Lovisi’s Mycroft Holmes, who is running Professor Moriarty as a counterspy, to Linda Robertson’s Mrs. Hudson, who tells her slight story to English Fireside Magazine). Michael Mallory and editor Kurland continue their series, respectively, starring the second Mrs. Watson and Moriarty himself (The Great Game, 2001), and C.D. Ewing, in a charming half-sized tailpiece, collects bite-sized reminiscences from the King of Bohemia and other unheard voices. Though George Alec Effinger’s mysterious East intrigue is more Fu Manchu than Sherlock Holmes, and Mel Gilden’s take on James Phillimore’s umbrella and Norman Schreiber’s portrait of Billy, of the Baker Street Irregulars, are perfunctory, Barbara Hambly (the first Mrs. Watson) and Kurland provide clever mysteries that could easily pull their weight outside the canon.

No one story is outstanding—but what does that matter in a saga clearly destined to go on forever?