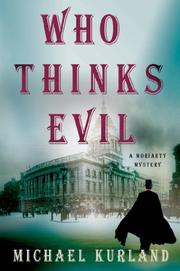 In Kurland’s (Victorian Villainy, 2011, etc.) latest tale of Professor James Moriarty, Sherlock Holmes once again takes a back seat to his historic nemesis as they battle sinister assassins to keep Victoria on the English throne.

The plotters are too subtle to target the Queen directly. Instead, they’re implicating her beloved but wild grandson, Prince Albert Victor, in a series of outrages they’re actually committing themselves. Hence Baron Renfrew, whom all parties concerned believe to be the prince, disappears after stabbing and disemboweling Rose, née Elsbeth Hooten, one of the young ladies who entertain gentlemen of means at Mollie Cobby’s establishment. The same grisly fate befalls Istefan, a boy whose career at the Château d’Espagne is cut short by the ministrations of a client code-named Peccavi. Mathilde von Tromphe, the prima donna of Covent Garden Opera House, is lucky to escape a third assault with her life. Moriarty, late of Midlothian University, now of Newgate Prison, is released by a coalition of well-placed lords and Home Office types determined to clear Albert Victor’s name before Scotland Yard claps the cuffs on his royal wrists. The man immortalized by Holmes as the Napoleon of Crime springs into action, questioning witnesses and making lightning inferences in a way strongly reminiscent of his great adversary. Meanwhile, Albreth Decanare, the self-styled Earl of Mersey and Last Plantagenet, along with the shadowy powers behind him, plots to destroy the reputation of the Saxe-Coburgs so completely that Mersey, suitably married to an eastern European princess, will ascend to the throne. Holmes turns up in the late innings to lend encouragement even more surprising than his logistical support. Mainly, though, this is Moriarty’s show.