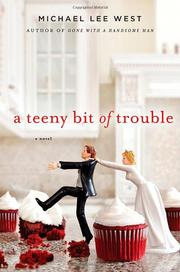 A TEENY BIT OF TROUBLE

Second installment in the adventures of freelance baker and reluctant sleuth Teeny Templeton.

Now comfortably ensconced at her late Aunt Bluette’s Georgia peach farm, which she’s been able to save thanks to a windfall inheritance from her now-deceased ex-fiancé, Teeny is finding that her tiny hometown of Bonaventure is a hotbed not only of petty gossip but murderous machinations. When Teeny inadvertently witnesses the strangulation of her high school nemesis Barb at the hands of a lanky stranger in a Bill Clinton mask, her current fiancé (and Barb’s former lover) Coop, a lawyer, advises Teeny to lay low. In the first installment (Gone with a Handsomer Man, 2011), incredibly precocious 10-year-old Emerson, Barb’s daughter, showed up on Coop’s doorstep to claim he is her real father, not creepy pharmacist Lester, whom Barb married on the rebound from Coop. Lester, only too eager to disown Emerson, demands a DNA test. As Teeny investigates Barb's death, aided by a trail of cryptic clues Barb planted, she encounters a cast of characters and potential villains straight out of Southern Novel central casting: at least two foulmouthed, hard-drinking old ladies, two middle-aged former cotillion debutantes who still see Teeny as trash, and diverse exemplars of Southern manhood. Teeny rebuffs every effort of laconic and lean Red, Coop’s private eye, to keep her out of trouble. Son, now a successful plastic surgeon, once almost supplanted Coop in Teeny’s heart. Then there is repellant lothario Josh, who runs Bonaventure’s mortuary, and Norris, Lester’s equally creepy brother whose medical license has been yanked for sexual assault. A number of healthy people, many of them Son’s patients, have been dying of mysterious causes after hospitalizations for minor injuries or elective surgery: Could Barb’s anagrams, decoded by Emerson, indicate that Bonaventure’s newest industry is organ trafficking?

Far too many characters and a large school of red herrings impede the flow, but snarky repartee, and the continuing conceit of Teeny’s recipes for disaster, keep the comedy afloat.

GONE WITH A HANDSOMER MAN
by Michael Lee West
Fiction

MERMAIDS IN THE BASEMENT
by Michael Lee West
Fiction

SHE FLEW THE COOP
by Michael Lee West