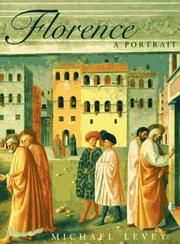 Levey, former director of London's National Gallery and a prolific art historian, explores the long history of the fabled city-state of Florence. Said to have been founded by Julius Caesar, Florence was originally a republic based on the Roman model, made wealthy by the clothmaking trade and Mediterranean commerce. The symbol of Florence, the lily and the lion, denoted a yoking of grace and strength, qualities that would in fact enable the city to survive such calamities as fire, flood, and plague—events vividly described in the author's narrative. During the Renaissance, fervent religious devotion and brilliant artistry, dedicated to such enduring themes as the city's patron saint, John the Baptist, and the Madonna and Child, coexisted with eruptions of violence and long-standing family vendettas, a civil war between the city's Guelph and Ghibelline factions, and the struggle between the Holy Roman Empire and the Papacy. Along with the constant maneuvering for power among the city's great families (most notably the Medicis), Levey presents Florence's great achievements in the arts: He believes that the city's visual arts—its architecture, sculpture, and painting—reveal its soul better than any words. Levey pays homage to the great names of Florentine art, including Michelangelo, Donatello, Brunelleschi, Ghiberti, Raphael, Fra Angelico, and Giotto, as well as to such great children of Florence as Dante, Petrarch, Boccaccio, Machiavelli, and Galileo. Florence's importance extended into modern times: In 1865, the city was named the capital of a united and revitalized Italy. Levey points out that present-day Florence would still be recognizable to its citizens of the past, and he asserts that one still senses there the contending elements of piety, an appetite for worldly prestige, and a consciousness of the next world, which have been constants in Florence's long history. A fine achievement. Exceptionally detailed reporting about a fascinating city. (50 color illustrations, 100 halftones, 3 maps)