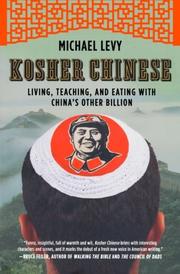 Living, Teaching, and Eating with China's Other Billion

An ex–Peace Corps volunteer chronicles the two years he spent living and working deep in the Chinese hinterlands.

With intelligence and zesty good humor, Levy tells the story of his sojourn as an ESL teacher in Guiyang. “In American political terms,” he writes, “it was red China, as opposed to the blue, progressive, latte-sipping China of the coast.” As the only white native speaker of English at Guizhou University, Levy soon became the center of attention. But it was his Jewish identity—which he shared with Chinese cultural icon Karl Marx—that made him a particular object of student fascination. Drafted as the leader of the Guizhou Jewish Friday Night English and Cooking Corner Club, he prepared challah bread on his day of Sabbath, “no matter what Rabbinic rules were broken.” Levy’s students and colleagues also pressed him into service as resident love advisor. As one girl told him, “Americans like him [had] been falling in love since Shakespeare and [had] many examples to follow.” Chinese people did not. The college basketball coach eventually recruited him as the star player on the Guizhou team, and Levy earned the moniker “Friendship Jew” and notoriety for his hirsute body. At first bewildered by culture where guanxi (personal connections) were crucial to upward mobility and where Wal-Mart, Pizza Hut and KFC were considered the height of Western cosmopolitanism, the author learned to accept contradiction as one of the defining trait of modern China. His most profound insights came from a group of graduate students he taught who identified with writers of the Lost Generation. Like these men and women, the students “lived in a world that seemed unmoored from traditional values.” Knowing that he could change neither the world in which he found himself nor the fate of those whom he befriended, Levy found unexpected comfort in the pop-culture wisdom of a teen singing sensation named Li Yuchun: “You cannot change the course of a river, [b]ut you can learn to appreciate its beauty and power.”