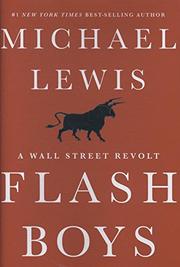 In trademark Lewis (Boomerang: Travels in the New Third World, 2011, etc.) fashion, a data-rich but all-too-human tale of “heuristic data bullshit and other mumbo jumbo” in the service of gaming the financial system, courtesy of—yes, Goldman Sachs and company.

That stuff you see on TV about dinging bells and ulcer-stricken traders pacing the floor of the New York Stock Exchange? It’s theater. The real speculative economy lives invisibly in little wires that go to nodes in out-of-the-way places, monitored by computer, shares bought and sold by algorithm. If you send a sell order, it might get intercepted for a fraction of a second by an intermediary that can manipulate the order to squeeze off one one-hundredth of a penny in profit—small on the individual level but big when you consider the millions of trades made every day. Both the system and that process are considerably more complex than that, but this fact remains: It dawned on someone that a person could grow rich laying ever faster optic cables to selected clients, cutting deals with the governments of towns and counties “in order to be able to tunnel through them,” all perfectly legal if not exactly in the spirit of the market. Lewis follows his tried-and-true methods of taking a big story of this sort and deconstructing it to key players, some on the inside, some on the outside, at least one an unlikely hero. In this case, that unlikely hero is an exceedingly mild-mannered Japanese-Canadian banker who assembled a team of techies and numbers nerds to track the nefarious ways of the HFT world—that is, the high-frequency traders and the firms that engaged in “dark pool arbitrage” as just another asset in their portfolios of corruption.

If you’ve ever had the feeling that the system is out for itself at your expense, well, look no further. A riveting, maddening yarn that is causing quite a stir already, including calls for regulatory reform.