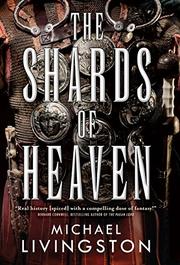 THE SHARDS OF HEAVEN

Titans of Roman history grapple for control of an empire with the aid of a mystical weapon in this debut historical fantasy novel from Livingston.

After the assassination of Julius Caesar, two groups attempted to seize control of his domain: his adopted son, Octavian; and Mark Antony, whose lover, Cleopatra, is mother to Caesar’s biological child, Caesarion. Woven into this very real historical conflict is a dose of fantasy: Juba, Octavian’s adopted brother, has recently discovered a magical artifact. Known by many names, including Poseidon’s Trident and the Staff of Moses, its provenance is unclear but its powers are unquestionable—it can move objects, shred a man to pieces, and manipulate the waters of the sea—and its strength seems to originate from a jet-black stone at its heart. Juba is searching for another artifact—scrolls said to hold the secrets of the gods—but Octavian’s blood lust and cruelty are hampering his efforts. Meanwhile, as Cleopatra’s children and their tutor attempt to evade Octavian in the sprawling, bustling city of Alexandria, the truth of the origin of the Trident—and its sister artifact, the Ark—is coming to light. Meanwhile, armed with the Trident, Octavian and his army are bearing down on them. Bloody battles are waged, unoriginal but relevant theological questions are laid before the sprawling cast of characters and their shifting alliances, and while the outcome of history is fixed in time, the question of how these events came to be is given new life. Readers with an interest in this era will be captivated by the weaving of fiction with the reality of the past and the weaving of the reality of the past with the magic of the unseen world, even if the religious inquiries of the text aren’t especially fresh.

A satisfyingly supernatural back story for the all-too-real final war of the Roman Republic.