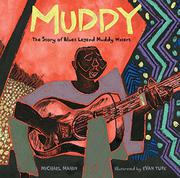 McKinley Morganfield, raised by Grandma Della, is nicknamed Muddy for the Mississippi mud he plays in. Even more than church music, he loves the stuff “they didn’t play on Sundays”—Delta blues. Muddy soaks up such influences as slide guitarist Son House and plays what instruments he finds or makes. A fieldworker by day, he buys a guitar and plays juke joints at night. Mahin dramatizes Waters’ departure for Chicago as a last-straw disagreement with a field boss and uses a refrain—“But Muddy was never good at doing what he was told”—at seminal junctions. Waters responds to Chicago’s jazz-infused blues scene not by rejecting Delta blues, but by literally amplifying it: “Muddy plugged in, turned on, turned up, and out came the sound of the Delta, buzzing and mad like an angry hornet’s nest.” Turk’s breathtaking pictures fuse historical newspaper clippings, paint, printer’s ink, oil pastels, and china marker. His symbolic palette shifts from sun-seared, white-gold cotton, red earth, and undulating river-blue to Chicago’s urbane, neon-lit green, blue, and black. (Muddy retains his Delta-born, underpainted red contours throughout.) Motifs like the purple of Della’s dress repeat dynamically. A note on the copyright page states that both lyrics and dialogue are invented.