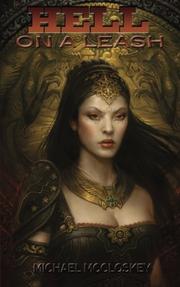 HELL ON A LEASH

In the author’s (Insidious, 2010, etc.) action-packed fantasy, a troupe of thieving bandits is on the run with the latest plunder, while the fiercest of the bunch—the Four—must battle an army and cater to the will of a dragon.

The Four—two men, Ralcander and Nergal, and two women, Avawo and Kreen—earned their reputation for taking the beefiest part of their loot and killing any fellow brigand who tried to take a piece. But when they stumble upon an old temple in ruins, they’re bested by a dragon, which commands them to bring it the king’s son. Easier said than done: Prince Keldon has already begun assembling an army to track down the thieves. Do the Four engage Keldon’s legion to draw them to the two-headed beast, or can they resist the dragon’s control? McCloskey’s novel has little in the way of story and a seemingly endless barrage of men and creatures in combat. The fights, however, are captured with vivid descriptions that colorfully detail every strike and block and the fallen in the throes of death. One chapter even opens with action in progress—the “slap of an iron-hard hand” and “leather-bound feet shuffling” as two men spar. Many of the characters are reprehensible, but the Four are certainly less offensive than Talok, a warrior-monk initially enlisted to join the prince’s army with his fellow monks; but Talok decides that he’s the only one who’s necessary. Nergal, a half-orc and perhaps the most likable character, is simple-minded but is also apparently the only one not hiding anything. The fantasy story has its share of mystical creatures, including one that leaves decapitated soldiers in its wake, but the true focus of the book is the intense battle sequences. There’s also the occasional relief from the visceral signs of war, like Ralcander trying repeatedly to bed Avawo, despite knowledge that many men who’ve had that pleasure are dead by morning.

A hard-nosed medieval tale, recommended for readers serious about their action.