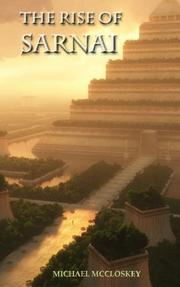 In this epic story of ancient conquest, a man leads his army against several nations in order to fulfill a prophecy of greatness.

The leader of the Sarnese people is a power-hungry and bloodthirsty man called Pharkol, who, together with his wife Simarra’s powers as a seer, plans to defend their city against invaders. Once the attacking army is defeated, Simarra announces that in order to sustain and grow the Sarnese population, Pharkol must extend his power outside the Gateway to the barbaric people beyond its protection. She prophesies that Pharkol will take three more wives besides her, and the sons from these wives will rule the empire. But before Pharkol embarks with his warriors, Simarra warns of a dark omen of death—the marzen, a large bird of prey. With this in mind, Pharkol ventures out and fiercely destroys any savages that threaten his campaign for Sarnese glory. After each successful battle, Pharkol picks a new wife. The first is kind and meets a tragic end at the hands of the second, who is wild and violent. The third is an intelligent ambassador. Meanwhile, Simarra continues to send him letters forecasting the demise of still more enemies. Simarra reveals herself to be the real catalyst for the action in this novel, although fans of war tactics and battle scenes are sure to enjoy Pharkol’s exploits. However, Pharkol himself remains a rather one-dimensional character with his impassive killings and aggressive domination over his wives, who are in fact victims that are seen as spoils of war. Pharkol’s victories start to become predictable, and his hubris is unwavering, since he’s secure in the knowledge of his prophesied empire, but the ending offers an interesting portrait of a man who knows nothing other than martial success.

A straightforward, imaginative tale of conquest and warfare.