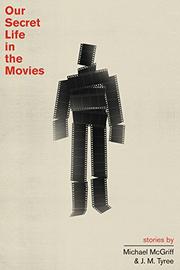 OUR SECRET LIFE IN THE MOVIES

Coming-of-age along the weirder edges of late-20th-century America is evoked through a montage of gritty, frequently bizarre tales spinning obliquely off cult and classic movies.

If you were to read a story about a man who leaves his family to marry one of a dozen eggs he buys at a grocery store (yes, you read it right the first time), would it occur to you to somehow connect this to the 1983 science-fiction thriller Blade Runner? Assuming you’d seen the movie and given some thought to its theme, you might—or you might dismiss the connection altogether. Such challenges to memory and intellect make this novel as close to an interactive experience as reading a collection of cutting-edge short fiction can be. McGriff and Tyree take turns writing brief stories inspired by, but not directly connected to, the same movies. Some links are easier to make than others: The railroad-tracks riff deployed by both writers off George Washington (2000) will resonate with those who remember a principal setting of David Gordon Green’s haunting reverie of childhoods at risk, while On the Waterfront (1954) inspires one of the writers (there are no bylines) to take a surrealistic stroll along the docks while the other takes off after someone who ratted him out. But after a while, it doesn’t matter how you match your memories of the movies with theirs or whether you’ve seen all of them. Because what emerges from these sometimes-opaque, often strikingly realistic sketches is a portrait of suburban or rural youth from the 1980s to the present day; “linked snapshots,” as the authors’ introduction aptly puts it, “chronicling our parallel trajectories as the last children of the Cold War.”

An intriguing, frequently affecting experiment that challenges its readers to think anew about sharpening and refracting their memories of both life and art.