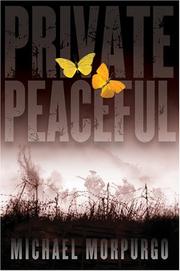 From England’s Children’s Laureate, a searing WWI-era tale of a close extended family repeatedly struck by adversity and injustice. On vigil in the trenches, 17-year-old Thomas Peaceful looks back at a childhood marked by guilt over his father’s death, anger at the shabby treatment his strong-minded mother receives from the local squire and others—and deep devotion to her, to his brain-damaged brother Big Joe, and especially to his other older brother Charlie, whom he has followed into the army by lying about his age. Weaving telling incidents together, Morpurgo surrounds the Peacefuls with mean-spirited people at home, and devastating wartime experiences on the front, ultimately setting readers up for a final travesty following Charlie’s refusal of an order to abandon his badly wounded brother. Themes and small-town class issues here may find some resonance on this side of the pond, but the particular cultural and historical context will distance the story from American readers—particularly as the pace is deliberate, and the author’s hints about where it’s all heading are too rare and subtle to create much suspense. (Fiction. 11-13, adult)