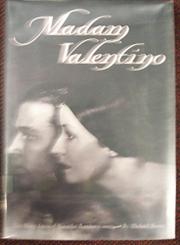 The Many Lives of Natacha Rambova

Well-done life of Rudolph Valentino's wife, a woman of boundless gifts, by art historian Morris (St. Mary's College). With a keenly written text and 150 duotones (not seen), and considering Natacha Rambova's background in Egyptology, ballet, and as an exotic costume and set designer (she designed Alla Nazimova's film of Salome, basing her costumes and sets on Aubrey Beardsley's original drawings for Oscar Wilde), Morris's biography bids fair to satisfy in all departments. Born Winifred Shaughnessy in Salt Lake City, Rambova signed up with the Theodore Kosloff Imperial Russian Ballet in Manhattan, was given her stage name by her lover Kosloff, who first seduced her at 17. When she confronted Kosloff with his infidelities, he bloodied her leg with birdshot. Rambova's mother's sister-in-law was sapphic Elsie de Wolfe, the world's first interior decorator, who took on Rambova's mother as her partner; both became millionaires, decorating homes for the rich and mighty. Rambova herself, who read only world mythology both as a child and an adult, inherited the de Wolfe/Shaughnessy artistic temperament, designed her own ballet costumes, became a costume designer for Cecil B. De Mille, later designed Rudolph Valentino's image, costumes, and sets, and then became a writer/director. Valentino had made only one film when she met him and began shaping his publicity. When his studio fought her efforts, Valentino signed a contract excluding her from work on his pictures. She fled and divorced him. Chasing her, Valentino came down with a necrotic hole in his stomach, died of longing in Manhattan, had a riotous funeral. Rambova went on to become a playwright, an actress, and a spiritualist, with her huge labors in Egyptology winning the admiration of Carl Jung. She died at 56, of scleroderma, a disease that dried up her inner organs. A questing, creative woman far ahead of her time—and truly exotic.