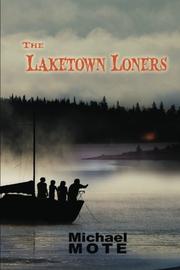 Mote’s young-adult novel follows a group of outsider teens who embark on a dangerous, fantastical adventure.

Julian Peabody has never fit in. Because of his parents’ work, he has spent many of his 14 years moving from town to town. So when the Peabodys move to Laketown, his expectations of once again attaining misfit status at school are quickly fulfilled. Nevertheless, he enjoys living in the small town by the water, and even though things at school are no better than usual, he meets a kindred spirit in Morris, the “fat kid.” Eventually, the two join up with two other outsiders, Louis and Bree. In particular, Julian and Bree both feel pulled to the water that borders Laketown. This feeling leads the four to discover a secret island where they form the Village, a clubhouse that they can get to only via the submarine that Louis built. Mote’s appealing, distinct characters each have an appropriate gift that will come in handy when the gang embarks on a scavenger hunt in search of magical relics. Julian is their guide, while Bree is the emotional center. Pursued by a mysterious Darth Vader–like villain named Cloak, the foursome initially ventures underwater to make their first find. Mote writes compellingly of the teens and the sights and dangers they encounter, but he keeps Cloak too much of a mystery. Occasionally, Mote leaves the kids to focus on Cloak and his evil band, but never long enough to fully describe him. Nonetheless, Cloak’s posse chases the kids underwater, under- and aboveground in the frightening No-Ray woods, where the kids must use their powers to escape not only Cloak but also the strange, treacherous forest animals. After experiencing some success with their gifts and teamwork, the kids return to the Village only to be faced with a difficult decision that results in an unsatisfying ending and hints of a possible sequel.