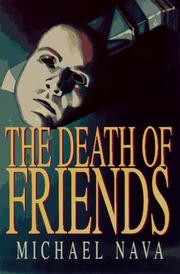 THE DEATH OF FRIENDS

For years, Chicano lawyer Henry Rios has kept the secret that his old Stanford classmate Christopher Chandler is as gay as Henry himself—he even helped him plead an ancient lewd-conduct charge down to something that wouldn't destroy his career— despite the pressure from his friendship with Chris's wife, Bay. But now that Chris has been battered to death with his Judge of the Year award, his closet door springs open. Zack Bowen, the new boyfriend whose plans to take Chris away from his family ended when he found Chris dead in his chambers, turns up on Henry's doorstep but disappears one jump ahead of the police. And as Bay and her angry son Joey unload on Henry for keeping Chris's secret for so long, ambitious homicide dick Yolanda McBeth zeroes in on the kid. Awash in his painful memories of Chris, and traumatized by his AIDS-stricken former lover Josh Mandel's swift descent into the dead zone (``He had no idea that dying would be such hard work''), Henry still manages to find a flaw in the search warrant McBeth used to find the murder weapon in Zack's apartment. But if Zack didn't kill Chris, who did—and does Henry really want to know? Though the perp seems to have been hiding in a barrel, the final revelations about Chris's tormented double life are chillingly on-target. Henry's first case since The Hidden Law (1992) shows once again why his gay mysteries transcend the special-interest tag. If you haven't discovered him yet, an uncommonly rich experience awaits.