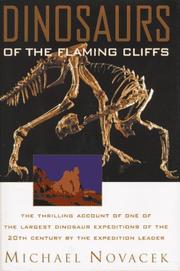 DINOSAURS OF THE FLAMING CLIFFS

Field paleontology in Mongolia's Gobi Desert is at once the most difficult and the most rewarding of scientific endeavors; here's a firsthand account by the leader of a major expedition. Dinosaur buffs already know the spectacular fossils brought back from the Gobi by previous generations of paleontologists. But the Cold War intervened, preventing Western scientists from exploring the fossil beds for six decades. With the breakup of the Soviet empire, Novacek (curator of vertebrate paleontology at the American Museum of Natural History) decided to seize the opportunity to explore the Gobi. The expedition had to overcome incredible logistical and political barriers: scorching heat, deadly sandstorms, and obtaining food and fuel in a country whose economy is in free fall. But as Novacek and his colleagues quickly realized once they reached the vast desert, there were spectacular fossil beds awaiting them. In some places a scientist could pick up dozens of well-preserved specimens in a short walk. Among their discoveries: dinosaur nests, some with the skeletons of brooding parents preserved with the eggshells; small theropods (carnivorous dinosaurs), including the now-famous Velociraptor; herds of the sheep-size grazer Protoceratops, at all ages from juvenile to adult; and a wealth of early birds and mammals. The book alternates descriptions of the various expeditions (the team has returned several times to explore new areas) with informative and up-to-date discussions of modern paleontology. The reader will learn a great deal not only about the Gobi discoveries, but about such related concepts as how a fossil is created and preserved, plate tectonics, the evolution of birds (probably from a theropod ancestor), and theories of why the dinosaurs became extinct (Novacek is cautious about the asteroid impact theory). A fine treatment for the general reader and a treasure trove for dinosaur buffs. (30 b&w illustrations, not seen)