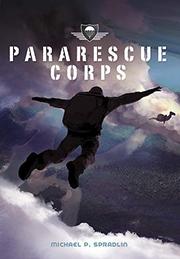 From the Pararescue Corps series

Spradlin chronicles several missions of a team of U.S. Air Force Pararescuemen as they travel to some of the planet’s most perilous spots in order to save lives and live up to their motto: “These things we do, so others may live.”

Be it on the forbidding cold mountainside of Denali in Alaska, the wild and impenetrable Amazon jungle, or the boundless flood plain of the Nile River, the elite men (there are no women) of the U.S.A.F. Pararescue Corps risk their lives rescuing lost and injured soldiers. Author Spradlin adroitly mixes accounts of fearless engagement, physical prowess, and military tactics in a fast-moving book that can get the right reader hooked. This book is not for everybody, however; some readers might grow tired of the never-ending heroism, the steely resolve, the exaggerated accounts of brazen engagement—as in an early incident when one empties his M-4 at an oncoming missile in Afghanistan—or the heavy usage of military jargon and peppering of initialisms and acronyms (PJ, LZ, NCO, SERE, CRO, etc.). However, for those readers who eat this stuff up, it will be camouflage-coated candy. The PJs are a diverse crew judging by naming convention, but they are nearly identical in derring-do.