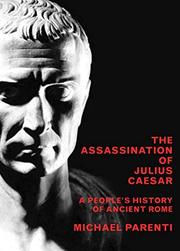 THE ASSASSINATION OF JULIUS CAESAR

A People’s History of Ancient Rome

Populist historian Parenti (To Kill a Nation, 2001, etc.) views ancient Rome’s most famous assassination not as a tyrannicide but as a sanguinary scene in the never-ending drama of class warfare.

His savagely entertaining brief begins with the Ides of March, 44 b.c., and returns to the details of the murder 170 pages later. The argument in between presents revisionist history at its most provocative. Employing the notion of “gentlemen historians” he advanced in History as Mystery (1999), Parenti writes as much about historiography as he does about historical events. Former and current patricians, the gentlemen historians are concerned with promoting the interests of their class, he contends, not in understanding the past. And so Parenti rips new ones for all those Roman “heroes” celebrated in Latin I and Ancient Civ—and in the GOP. Thus, Cicero is “a self-enriching slaveholder, slumlord, and senator”; Cato the younger, a money-grubbing apologist for political assassination. Julius Caesar, by contrast, despite his well-chronicled failures (he owned slaves and despoiled distant lands), was interested in the public welfare and thus a danger to the fat cats who purred in his presence while privately sharpening their claws. The author, who confesses to having little Latin, girds his argument with numerous examples of Roman populists (e.g., Tiberius Gracchus, Lucius Appuleius Saturninus) whose flesh yielded oh-so-easily to assassins’ knives when share-the-wealth proposals made jittery the monied and the propertied. Parenti’s account of Caesar’s murder and its aftermath is a highlight, and his primer on the political strategies exercised by the Roman rich is sobering; much sounds distressingly contemporary. Meanwhile, Shakespeare himself does not escape Parenti’s scalpel: the Bard, he argues, picked the wrong side and forever labeled the naughty Brutus (“a usurer of the worst sort and a spoliator to boot”) as noble.

This lively, lucid tract reminds us that historians gotta have attitude as well as game.