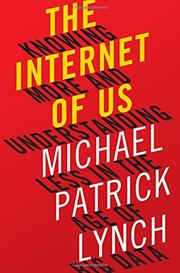 THE INTERNET OF US

Knowing More and Understanding Less in the Age of Big Data

How the Internet and “Google-knowing” can aggravate our tendency to be unreasonable.

Lynch (Philosophy, Director of the Humanities Institute/Univ. of Connecticut; In Praise of Reason: Why Rationality Matters For Democracy, 2012, etc.) takes issue with the widely accepted notion that the Internet is a net benefit because it makes more information available to more people more quickly and easily. He is concerned with the consequences of a growing confusion between our receptivity to information and informed understanding as well as the advantages taken by data companies based on surveillance and systematic invasions of privacy. Lynch fears the growing impact of rumors and false information through what he calls “information cascades.” Social media and the Internet in general, he writes, “are particularly susceptible” to a phenomenon comparable to “mob mentality.” After the 2013 Boston Marathon bombing, a photograph of a man and wounded woman were circulated, along with the story that the man had been about to propose marriage. However, the story was made up. Lynch argues that the trust people give to their sources of information can be both misplaced and abused. The Internet gives us more to disagree about and more sources to choose from. Given that many people limit whom they talk to and trust, those they agree with and think are authorities, the author is concerned that the Internet is increasing group polarization and the emergence of what he calls “isolated tribes.” For him, reasonableness can go by the wayside when people begin to discuss the different principles on which their views are based. However, the Internet did not cause people to act this way. Lynch effectively presents the case for rationality against factional loyalties and insists that there should be vigorous promotion of scientific methods and thinking in public discourse. This activity would encourage the positive habits of evaluating authority and sources.

An excellent, much-needed contribution to the constant battle to sort truth from falsity.