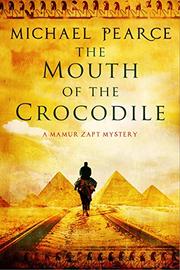 THE MOUTH OF THE CROCODILE

1913. The Mamur Zapt escorts a nervous pasha home from a small town in the Sudan, where life is as predictably unpredictable as it is in Egypt.

Pasha Hilmi is convinced that someone has it in for him. First someone tried to filch the briefcase he’s carrying, filled with sensitive trade documents, and then someone pushed his man Sayyid into the river, drowning him, perhaps in revenge, perhaps mistaking him for the Pasha. Nicholson, a senior administrator of Egyptian Railways, offers the Pasha, accompanied by the Mamur Zapt—Gareth Cadwallader Owen, the head of the Khedive’s Secret Police—the use of the Royal Coach back to the presumed safety of Cairo. Also along for the ride are Nicholson’s schoolboy son, Jamie; Parquet diplomatic dogsbody Yasin al-Jawad and his high-toned daughter, Aisha, and the usual retinue of servants and flunkies. The trip grinds to a premature halt when the train gets stuck in a sandstorm. The passengers are rescued in good time, but the briefcase is stolen in the confusion, laying the groundwork for the far more leisurely and characteristic second half of the story, in which the Mamur Zapt uses every resource available to find out not who stole the briefcase—that’s pretty obvious—but who hired the thieves and why.

A curiosity among Owen’s 17 decorous period cases (The Bride Box, 2013, etc.): half high-risk adventure, half low-impact sleuthing, with the Mamur Zapt overshadowed by his hireling’s investment-minded wife, the Pasha’s sheltered but charming lady, and the alarmingly precocious Aisha.