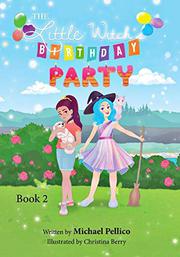 Pellico presents a birthday celebration with both familiar and magical elements in this children’s-book sequel.

Sabrina has planned a picture-perfect eighth birthday party for Anna, her new friend. As Sabrina’s other pals begin to arrive, they can hardly contain their excitement to meet the birthday girl, who’s a genuine, magic-wielding witch. Anna and her warlock brother, Drew, amaze the partygoers with a fantastic entrance; they have Anna’s color-changing cat with them, and Drew magically lights the birthday candles. Anna and her sibling are thrilled by the party piñata, the red velvet cake, and the pleasant celebration. When Sabrina and Anna part, they promise to meet again soon, so that Anna can teach her witch pal how to ride a bike and Anna can instruct her nonmagical friend on how to ride a broom. Pellico’s upbeat follow-up fantasy is longer and offers more detail than its predecessor. However, it lacks a strong plot, as the characters have no real problems to overcome. Readers also learn relatively little about Anna and her everyday life. The celebration itself offers a solid balance of fantasy and traditional elements, allowing readers to find joy in both. At times, the text feels cumbersome for an audience of early readers, but the blend of dialogue and narration maintains a good pace. Berry’s full-color illustrations are effective, particularly when depicting Anna’s and Drew’s magical-looking clothing. Once again, this series entry encourages readers to be open to other people’s differences, but its lack of conflict may strike some as unrealistic.

An early-reader fantasy tale that portrays a strong friendship but lacks drama.