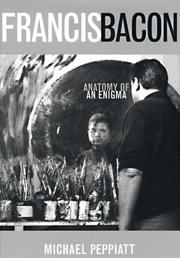 Anatomy of an Enigma

In his time, the late Francis Bacon was regarded both as England's ``most important living painter'' and as a ``cheap sensationalist.'' This excellent biography reveals a dramatic self- mythologizer who painted brilliantly enough to realize his self- cast, epic-tragic role. Bacon created a closely guarded myth of his excessive, tumultuous personal life, never wanting his enigmatic, powerfully disturbing paintings to be explained away with a simple biographical anecdote. He also blocked biographies from being published, and destroyed many of his paintings that didn't pass muster. Peppiatt, a friend of the artist's and the editor of Art International, respects Bacon's controlling, antireductionist instinct—not out of deference, but because no brief catalog of life experiences could explain the complex horror of any one of Bacon's paintings. The artist spent his early years in Ireland and England. He was as flamboyantly gay as the times would allow and was thrown out of the family by his father, who caught him wearing Mrs. Bacon's underwear. He traveled to Berlin and Paris and lived on the edge, associating with high society and low-lifes alike—a social fluency he retained his entire life. He endured, and sometimes enjoyed, beatings from various lovers. He drank to excess, took pills, and slept little. Ultimately, Bacon synthesized an artistic territory distinctly his own; he was ``insufficiently surreal'' to join the surrealists and too figurative to be an abstractionist. The unsettling power of his work eventually brought throngs of visitors to the most prestigious galleries in Europe and America. And his appeal endures: A recent exhibition in France drew up to five thousand visitors a day. Peppiatt stalks and bags elusive prey: a better understanding of a disturbing body of work created by a man who lived inscrutably, in purposeful chaos. (illustrations, not seen)