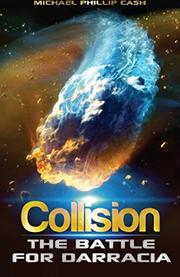 The Battle for Darracia - Book 2

At breakneck speed, Cash’s (Schism, 2013, etc.)second installment in the Darracia saga blends elements of sci-fi and fantasy as it continues to chronicle the adventures of a small group of heroes desperately attempting to unite a war-torn planet.

Still reeling from his uncle’s brutal attempt to usurp his father’s throne, V’sair—now king of Darracia—is struggling to keep alive his dead father’s dreams of a united planet. But the tensions between the Darracians (muscular humanoids with tails who live in floating cities) and the Quyroos, who live in the forests far below, are rising. To make matters worse, V’sair’s treacherous uncle Staf Nuen, a Darracian, has escaped and is no doubt planning another attack. The novel is essentially two intertwining storylines: One follows V’sair and his love interest, Tulani, a Quyroo high priestess, as they try to reunite the two races while also uncovering a traitor in their ranks; the other follows V’sair’s brother Zayden and his mission to find—and kill—Nuen. While both storylines are well-constructed and compelling, Zayden’s is easily the more entertaining as he tracks Nuen from planet to planet, going from one hair-raising adventure to another. The sequences featuring Zayden and Denita—including his overly possessive and undeniably seductive savior (“I saved you and you belong to me”)—give the story’s serious tone some much-needed levity. In a minor setback, the narrative tends to lose focus on worldbuilding. The series’ first volume was filled with rich descriptions of the various locales on and around Darracia—the thick forest of the Desa, for example—while this novel concentrates much more on action than on setting.