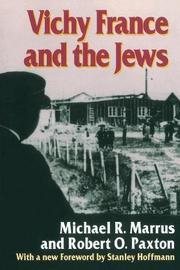 VICHY FRANCE AND THE JEWS

Only"" one-fourth of the Jews in wartime France (or, about 75,000) were deported to death camps in the East, to the disappointment of the Germans--which gave the defenders of Vichy an opportunity to claim, after the war, that French ""obstruction"" had held the number down, that Vichy itself had served as a ""shield."" In blasting those claims, historians Marrus (Toronto) and Paxton (Columbia), authorities on French Jewry and Vichy politics respectively, have made a major contribution to the new wave of literature on the Holocaust outside the Reich proper. They weigh the 1930s revival of French anti-Semitism--triggered by the refugee influx and its perceived threat to the economic, social, and political order. (""French conservatives lumped together what to them had become related ills: bolshevism, Blum, the Jews."") They note the prewar imposition of restrictions--and the importance of the 1939-40 ""administrative pogroms"" in laying the ground for ""the explicitly anti-Jewish persecution that quickly followed."" They observe that the Germans, in 1940, used France as a dumping ground for German-Jewish refugees--and so didn't encourage the French, initially, to adopt their anti-Jewish measures. Thus Marrus and Paxton build up their case: that the French not only were eager to take steps on their own, they were also (the authors remark, in conclusion) the only western European people to do so. Not until the mass arrests of Jews in the summer of '42 (native-born and refugees alike), not until women and children were seen packed into cattle cars (so much for ""forced labor""), did the French populace cease to regard the Jews as problems, and perceive them as victims. The government, however, continued to cooperate--registering the Jews, even rounding them up for deportation. With thorough documentation (and a keen instinct for the phony assertion, the spurious ""fact""), Marrus and Paxton have set forth a chilling story that suggests, still, that it didn't have to happen--anywhere: Admiral Horthy did better by the Hungarian Jews than Marshal PÃ‰tain did by the French.