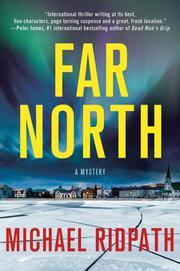 Detective Sgt. Magnus Jonson, seconded from Boston to Reykjavík, tackles two cases, one with global consequences, the other striking considerably closer to home.

In the wake of the calamitous financial meltdown that’s paralyzed Iceland, Óskar Gunnarsson, ex-chairman of the Ódinsbanki, has taken himself off to London, but that’s not far enough for whomever shoots him to death. The Metropolitan Police are far from certain that his killer was Icelandic, but they send DS Sharon Piper from Kensington to Reykjavík to liaise with local law enforcement just in case. Magnus is only too eager to work the case even before Inspector Baldur Jakobsson, head of the Violent Crimes Unit, hands it to him. He wastes no time in connecting Gunnarsson’s murder to the suspicious suicide several months earlier of Ódinsbanki manager Gabríel Örn Bergsson. And rightly so, since author Ridpath has already shown Bergsson being killed by his subordinate and lover Harpa Einarsdóttir, whose anger that he swindled her and her father out of their life savings and then threw her under the bus was whipped into a fury by an unlikely crew of agitators: aging punk rocker Sindri Pálsson, fisherman Björn Helgason, London School of Economics student Ísak Samúelsson and laid-off chef Frikki Eiríksson. Whoever pulled the trigger on Gunnarsson, Magnus realizes, has more targets in mind. But despite the Boston cop’s instincts, he’s seriously distracted from the case by disturbing new information about a long-simmering family feud that involves his own Icelandic relatives. Which case will claim his deepest loyalty?

As in Where the Shadows Lie (2011), Magnus doesn’t shine as a detective, and his fish-out-of-water act could just as easily have played out back home in Boston. Even so, his second case is bound to hook readers who wonder about either the fictional or the real-life implications of the Icelandic financial crisis.