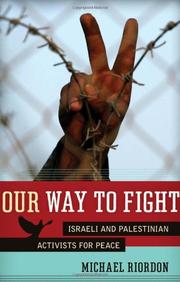 OUR WAY TO FIGHT

Israeli and Palestinian Activists for Peace

A left-leaning Canadian journalist and filmmaker talks to grassroots peace and human-rights activists in Palestine and Israel.

“In cultures that glorify war, the voices of authentic peace-makers are seldom heard,” writes Riordon (An Authorized Biography of the World: Oral History on the Front Lines, 2005, etc.), who traveled extensively throughout Israel and Palestine to interview more than 60 individuals—both Israelis and Palestinians—working for peace. In particular, he set out to learn how activists imagine building a “just peace,” which he defines vaguely as one that would allow Israelis and Palestinians to live as equals, with Israel presumably making concessions regarding borders, divisions of the land and the right of return of Palestinian refugees. In a statement reflecting the views of many quoted here, one Palestinian says: “We have to find some way to live together—without walls. To do this there are only two choices, one state or two. But Israel refuses both.” Riordon describes the motivations, work and hopes of disparate activists, including Meir Margalit, an Israeli politician who works through the Jerusalem Council to improve life for Palstinians; Dror Etkes, a human-rights worker helping Palestinians recover land taken from them to build Israeli settlements; and Salah Haj Yihyeh, manager of a Physicians for Human Rights mobile clinic that provides medical care in refugee camps. Many of the interviewees work through such organizations as Peace Now, Israel’s oldest peace movement; New Profile, which supports people refusing to serve in the Israeli military; and Zochrot, a group of Israelis that posts signs in places where Palestinian villages once existed. While all are deeply committed to solidarity with Palestinians, most confess to being pessimistic about the future. A bridge to peace is still possible, but “it is small, narrow, and weak,” says one activist.

A meandering account that will appeal mainly to readers sympathetic to the Palestinian cause.