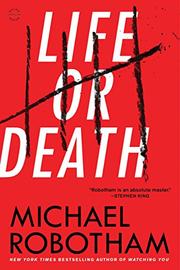 Australian novelist Robotham travels to Texas for this prison-break tale with a twist.

Audie Palmer, who admitted his involvement in the infamous Dreyfus County, Texas, armored security truck robbery, escaped from prison with only one day remaining on his sentence. Audie pleaded guilty to helping steal $7 million—money that’s never been recovered. But why did he disappear the day before his parole was to begin? That’s the question on the minds of everyone, from diminutive FBI Special Agent Desiree Furness to his best prison buddy, Moss. Soon after Audie runs, everyone involved in his case, from the former prosecutor to a deputy who is now the sheriff, is pulling out the stops to find him, and it’s obvious they'd prefer him dead rather than alive. Robotham generously shares information about the villains with readers, so there’s little suspense there. However, the back story, skillfully interwoven with the search for Audie, provides plenty of edge-of-the-seat excitement, forcing readers to frantically turn the pages to find out how all these different strands intersect. Robotham’s skill as a writer remains undeniable: He offers memorable characters caught up in an irresistible story. But the Aussie writer’s choice of Texas as his setting is bound to ruffle some feathers since he portrays the state as uniformly and relentlessly corrupt, its citizens as the dregs of society. “Texas only executes people on death row, not when they’re brain-dead because it might mean culling most of their politicians,” reads one passage. And while the writing is top-notch, albeit inflammatory in places, the finished product is also puzzling in that the novelist and his editorial team populated the book with many British expressions foreign to the setting, from calling a woman’s bangs a “fringe” to terming a flophouse a “doss house” to having a very Southern character refer to lines in a bank as “queues.”

Terrific storytelling that won’t win Robotham many friends in the Lone Star State.