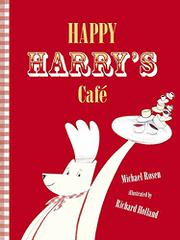 The picture-book crowd will most likely find this thin story bland and unsatisfying.

Happy Harry is a pleasant-enough white bear dishing out what appears to be delicious tomato soup at his café. Since the soup is so popular, all of “his friends come running for Harry’s soup before Harry’s soup runs out.” Soon Ryan the lion, Jo the crow, Robin the robin and Matt the cat come rushing in. As each friend arrives Harry says, “Take it easy…” and serves a bowl of soup. Most of the friends exclaim how wonderful it tastes, but Matt the cat declares, “The soup’s no good.” Usually happy Harry seems alarmed and agrees to try the soup at the cat’s urging. When Harry goes to taste the soup, he discovers that there is no spoon. This cheers up Matt immediately: “That’s it, Harry! There’s no spoon. That’s what’s wrong with the soup…!” The page turn shows everyone loudly laughing, and a few pages later Harry and Matt break into a song about the soup and their silly misunderstanding. Holland adds little spice with mixed-media illustrations in a palette of muted red, yellow-orange, sage green, white and gray.